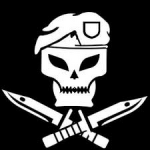 I try to maintain a professional manner at all times on this wiki. That includes comments, responses, and forum posts.

On the wiki, I primarily fix grammar mistakes and tidy up weapon pages. I occasionally will change a weapon's listed stats if it is incorrect or needs updating.

My main playstyles are all built around long-range combat. I tend to use weapons such as high-velocity LMGs, including L86 LSW, RPK, AUG HBAR and snipers. I am moving into using more of a variety of weapons. I quickscope on occasion, but not as much as I used to.

I first started playing the game in the beta. (I think I remember the MSR being a thing back then idk) I examined all of the starter weapons at the time, the M4, MP5K, M60, and intervention and settled on the MP5K. and used it for a good long while, even though I was trash. I eventually unlocked the UMP-45, which I unlocked and sucked even more. After a while, I decided to make a change. I discovered the love of the M60. (oh boy) This was the gun I used that helped me get better. After a while, in one game, I saw a player excelling with the AUG HBAR and decided to save for it. I eventually had enough credits and bought it. (Look at this dood) I even used the Ballistics tracker on it before I figured how no-skill that strategy is. (This kid ;-;) A million years later, I unlock the L86 LSW and completely overlooked it because I was too dumb to stop using the HBAR and the BFG-50 which I had bought by then. (Where is my bleach) I gave it a try and fell in love with it. I gave up the AUG HBAR, which had been my main weapon for a long time. I combined the LSW with an EOTECH, Muzzle Brake, Ballistics tracker, (I have no words...) and stubby grip to give people crippling depression with a ballistics tracker. I decided to switch my sight to the Coyote sight, which was the sight I used on the HBAR. In a more recent part of my history, I bought the L115A3 to do some proper quickscoping with my newfound skill. I still use it to this day, even though I feel bad about buying weapons like the BFG and L115A3 to this day.

Due to my previous usage of the ballistics tracker, I have set out on the path of redemption. I will raise my K/D past 2.0. It currently resides at 1.72 I have a long way to go. Forgive me...

My favorite guns by class

I honestly don't hate too many guns...

Melees - All of them.

My Opinion. Feel free to disagree.

1. Desert storm - Just plain great. Supports all playstyles, but does it a lot better than other maps such as suburbia. It seems to blend it all in a way that it doesn't have too much or too little of a certain playstyle at a time. Otherwise, I can't really explain why I like this map so much. It just works well in Phantom Forces.

2. Ravod 911 - Very close yet beaten out by Desert. Good for everything. Very fun verticality, yet can be annoying for OBJ modes, namely KOTH. Power points are strong, but have counterplay.

4. Mall - The verticality is pretty fun. I love how chaotic this map can be. The upper half of the roof allows people to snipe people down low or at the other side of the roof, however is not too powerful and has proper counterplay, which I am a huge fan of. It's chaotic, but it's a good kind of chaotic.

5. Warehouse - Good for just about any playstyle. Walls are a bit too easy to penetrate, however. I enjoy this map because it is a lot more simple than typical maps. It features a (somewhat) 3-lane design. This makes it more balanced, as flanking is much easier to pull off if campers are a prominent force on the battlefield. Cheese people with M60 APs.

6. Crane Site - THEY MOVED THE CRANE BACK. That's a good change in my book. It may not be positioned in the same way it used to be, but at least we can have a somewhat decent sniping position.

7. Metro - Annoying cross-map snipers in the main lane, But generally decent. Spawntraps can be VERY prominent on this map, as players can hold down an escalator with ease. This map has some SERIOUS spawn issues. If anyone tries to flank, they may likely be picked off by snipers on their side of the main lane. If one team dominates, it becomes one-sided VERY quickly. This map is very fun, but only if you are the team doing the pwning.

8. Dunes - Good for generic sniping, but is beaten out by previous stated maps. Feels a little awkward at times. One thing I like is just how random it can be. You never really know where people are going to gravitate towards when playing on Dunes. There are still predictable locations, however. I like how it is pretty much an "Anything Goes" kind of map.

10. Ruins - It seems better than it used to be. Somewhat of a three-lane design which I think is good. Then again, maybe I just don't hate it as much because those Blizzard and Luck exist.

11. Prison break - Too many linear, basic hallways, which leads to too much walking around and camping due to all of the turns and corners. Does not have great flow, but can be very fun for being a one man army. Some guy runs around a corner, says "Git Fr!ckt, B*scuit" and rips me to shreds with a shotgun.

12. Mirage - After the reworks (Random crane pieces dropped from the sky), It doesn't seem much better. D Kind of meh on TDM, but terrible for objective modes. Seriously, Stylis. What were you thinking with CTF, Kill Confirmed, and Domination. It is essentially Stone Haven from CoD: Ghosts.

13. Rig - This one is weird. Its decent, but not better than the OGs. I like how the elevated platforms create a sense of caution when moving throughout the map. Unlike Mirage, this map does not establish TOO much of this feeling.

14. Refinery - Feels like it got worse over time. The KOTH part of the map isn't that great, however, as people can come from any direction or fire at you from above, with little time to react or defend yourself if the player is at least half decent. I like how they experimented with verticality aspects on this map, making it smaller, yet taller. I feel like in this map, there is a lot of snowballing situations where one team pretty just locks down the opposing team's spawns.

15. Blizzard - Did they even try? Cover is thrown sporadically, and it feels like enemies can just approach from anywhere. It just feels like a great big snowy clutterfest of a map with no flow.

16. Luck - Too many cars, too many entrances to the hill. WAAAAAAAAAY too big. Also, too much random cover. This map is basically a maze. It feels really confining to be in the middle lane, between the outside lane and the Hill building. Far too complex for it's own good.

If you have any questions for me, just shoot a message my way.

Retrieved from "https://roblox-phantom-forces.fandom.com/wiki/User:CaptainTryhard?oldid=154800"
Community content is available under CC-BY-SA unless otherwise noted.