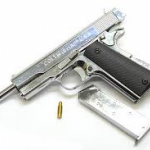 I'm a HK416 User lads. Also an ex-TF2 player. I'm currently a rank 100+, Over all KD isn't too good because I used to take this game like a cheese sandwich. Pretty decent at using the M16A3 and HK416, alongside running around with the Five-SeveN. Roblox account is kept private because I don't want to be bothered with FR.

M16A3? They'll laugh, but they'll regret. High Damage, Accurate and Versatile. Anywhere within 30-200 studs will make them melt faster than Butter. Know your routes, practise your aim and predict your opponents, as they won't get a chance to bite. If you keep your distance and aggression in check, the black rifle will clear the tunnels.

Raffica, high skill, high damage, pocket M16A4. Not much could be said, but with this state-of-the-art Italian pistol, you will burst your opponent.

So enough with the (terrible) puns, use them, but you'll encounter several misgivings about them, the M16A3 with this setup will require you to get used to the moderate vertical recoil, despite having the Folding Grip and Green Laser for better recoil control, and critical headshots (although only needing 1 out of 3 in close range, 2 out of 4 at longer distance) to perform well. The 93R will not stand well if you're incapable of effectively bursting and having poor precision.

My tryhard loadout, maybe a bit unusual given that I use the M16A3 over the AK rifles and other weapons. For me it's damage output is one of the better within the ARs while having moderately-good accuracy, better handling characteristics and of course, the insanely fast reload is what draws me to it. The 93R is a secondary version of the M16A4. No need to talk about it.

A rather fun loadout, but can be extremely viable under the right hands, great maneuverability, decent damage at range. Despite the G36C had it's recoil pattern nerfed to make the other carbines more viable, you'll still find it one of the best Automatic Carbine. Combined with Stealth Capability, you'll swiftly move through the map, leaving those spotted you behind the dust and the scene with only a few bullets. And a Stealth .45 Pistol would spare none if you're out of ammo for your Carbine.

The G11K2 but made in China

A joke loadout. Don't use it.

The ultimate sniper loadout, maximum skill, no compromise once mastered. That's all I gotta say.

Things that I hate

Retrieved from "https://roblox-phantom-forces.fandom.com/wiki/User:HK416User?oldid=160570"
Community content is available under CC-BY-SA unless otherwise noted.